From technical information and guides to safety tips and information on new innovative products; you will find all that and more right here!

The Importance of Tyre Tread Depth

The Importance of Tyre Tread Depth

For most people their car is a vital part of their everyday life. However, much like the internet or mobile phone it is an integral part of everyday life that is very much taken for granted.

Everyday, throughout the country people get in their car, turn the key and off they go, always under the same assumption that the hundreds of components operating in unison to make their car go are all working fine and in a faultless state of repair.

As a result, all too often the only time cars are checked is when it comes round to MOT time or when the service light appears on the dashboard. Worryingly this means out of the 34.2 plus million vehicles on the roads in Great Britain,(i) many of them will only be checked once, maybe twice a year.

For people who replace their cars every year or so this may not be an issue. These people can be fairly confident that the consumable components on their car, such as tyres are in good shape and doing their jobs as effectively as possible.

What about the rest of us? Can we be so sure our tyres are in good working order?

Statistics released by the Vehicle and Operator Services Agency (VOSA) showed that in the year 2009/10, almost 6.4% of all the 26 million vehicles MOT tested failed due to illegal tyre tread depths[ii].

This means throughout the course of the year over 1.6 million vehicles were driving around with massively reduced wet braking and cornering abilities due to having at least one illegal tyre.

What’s more, that is only out of the 26 million vehicles that were tested in 2009/10. Let’s not forget there were over 34 million vehicles on the road in 2011, making those 1.6 million vehicles with potentially dangerous tyres more likely to be closer to 2.1 million. By now in 2014,  it could easily be 2.5 million.

Potentially dangerous illegal tyres. What does that mean to me though?

Independent tests carried out by the Motor Industry Research Association (MIRA) found that a cars braking ability started to dramatically reduce once the tread depth on the tyres reached 3mm[iii].

The tests were carried out using sets of tyres with 5 different tread depths and involved braking from 50 mph on a wet asphalt surface to replicate driving after or during a rain shower.

This test is by no means alone in its findings. It is a well-known and documented fact that changing at 3mm instead of 1.6mm brings huge tyre safety and performance advantages. Here is what two of the nations independent breakdown suppliers in the UK had to say about the subject.

Kevin Delaney of the RAC Foundation says, “If the Government and the Police change before reaching 1.6mm, it makes you wonder why that’s the legal minimum.”

So what would it cost me to be safer and replace my tyres before they became dangerous?

The Continental Tyre Group carried out research into the extra cost the average consumer might expect to pay if they were to change their tyres at 3mm instead of 1.6mm.

They found that the cost of replacing your tyres at 3mm instead of 1.6mm would cost approximately £20 more per year on overall motoring costs. That equates to 39 pence per week.

It is all well and good hearing this from a multi-national company, but without some facts and figures a statement like this has to be taken with a pinch of salt. Therefore, to put this statement to the test I have done my own calculations.

We have a stock profile of over 2245 individual tyres for cars, vans and 4x4’s in our system. These include all tyre brands from budget tyres through to premium tyres, all tyres sizes from the original Mini tyres to Ferrari and Porsche tyres, and all tyre types from winter tyres to extra load and Run-on-flat tyres.

Out of all these tyres, the average fully fitted price, inclusive of VAT is £101.38.

While average expected tyre life is hard to quantify, as it varies greatly depending on the quality of the tyre, the type of vehicle and the driving style of the individual. The data we have gathered from the tens of thousands of tyres we have sold over the year’s shows that across the board an average tyre should last around 30,000 miles.

We also know from freely available information from the Department for Transport, the estimated average annual car mileage in 2012 was 8,200 miles.[iv]

So let’s have a go at some maths and see what we come out with. 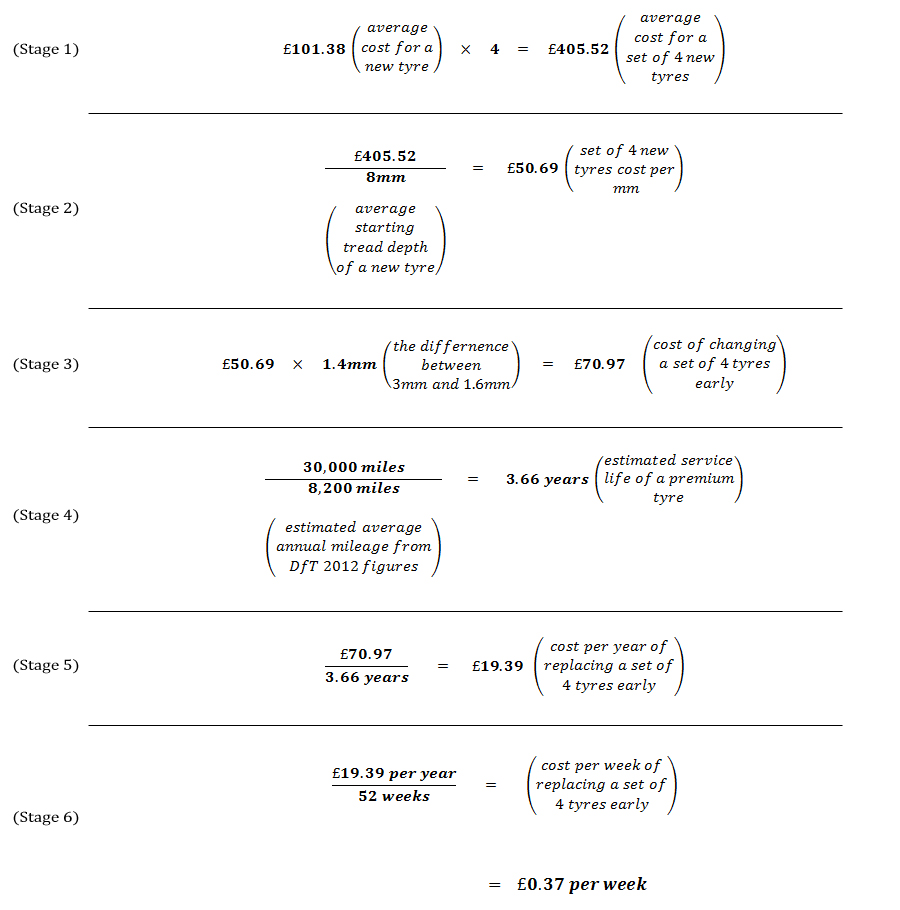 When I first made that calculation, I never expected to get to a figure so close to the one Continental tyres came up with. In fact, I double checked all my figures to make sure as it seemed too close to be true, but it was.

Now clearly this cost will not be the same for every person. For some people it may be £1 a week, and for some it may be £0.15p per week. Either way, the fact remains that it is not a lot of money in the grand scheme of things to ensure that your car has the ability to stop when you really need it to.

Therefore in summary there is only really one question.

Is it worth an extra 39 pence per week to have good quality tyres that are 40% more effective in the wet, which will stop 6.3 meters shorter when the brakes are applied?